As a mass media studies teacher, I teach students how to publish films as well as publish my own films. My Youtube channel can be found here. Please use the contact form on this page to get in touch with me about any film you see here or a film project that you have in mind.

I worked with Penn-Harris-Madison and New Avenues staff to shoot, edit, and distribute this film about the district’s employee assistance program.   The project and its narration are very straight forward, and it is hosted at the PHM website.

Penn High School is a one-to-one school where every student has a Chromebook and a Gmail account. Since adoption three years ago, both faculty and students have become more dependent on these machines and the cloud in which they operate. Of course, there are going to be problems when 3,500 young people use their machine everyday. The Computer Support Internship (CSI) class is taught by award-winning teacher, Steve Sinish. This film takes a closer look at his class and the work they do to keep Penn High School online.

I created this film in a couple of days after I surveyed dozens of other teachers who run summer camps in the South Bend, Mishawaka area.  I took all of their advice and boiled it down into five tips that I thought would help IUSB faculty run successful camps.  Many in my audience were first time summer camp directors, so my goal was to give them the most practical advice I could find.

For the Environmental Change Initiative and ND Gain, I edited a series of films that were shot at the Woodrow Wilson Center in Washington DC in January of 2015.  Most of my work required fixing audio and generating graphics. The films include meeting highlights, and several interviews with stakeholders attending the meeting. Interviewees include Ms. Kit Batten from US-AID, Ms. Jennifer Crozier from I.B.M., and Mr. Scott Appleby of the University of Notre Dame.

A couple of PNN students and I shot a ‘stand-up’ in a custodial closet in order to make a film that teaches custodial staff how to use a new cleaning product at P.H.M. Schools.  Because of the tightness of the doorway, and the fact that we needed two cameras and a boom mic, we could not do much about the lighting, but it was a lot of fun to shoot and edit.  The film is used by PHM custodial staff at the beginning of each year.  You can watch the film here.

For three years I have been shooting, editing, and distributing the Monday Morning Memo.  It is a fun little serial that our principal, Steve Hope, writes for the staff every week. I enjoy it, and I get a lot of pleasant feedback from the Penn High School staff. The March 7th episode from this year offered a unique opportunity to add some creative elements in the second half; it was one of my favorite episodes to edit, and I took a little more time with it to make work out just right. Watch them all in this playlist. 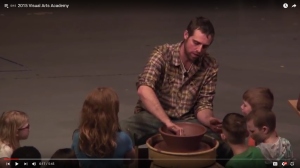 district. Teachers and administrators work together to create an summer-cam-like experience where kids get hands-on instruction in the arts.  In 2016, the focus of the academy is on language- building.  To help promote the academy, I shot and edited this film last year.

A Chat with Biology Teacher, Kat Lubker, and a Look at her Class

Kat Lubker taught Biology at Penn for a number of years. In this project, I interviewed her about her lesson plans for when she is absent. but my students (Caleb & Gary) conducted the classroom interviews and shot the b-roll footage. It was a fun and unique collaboration, and it was an interesting story to tell. You can see more classroom films here.

In this film, I worked with Penn-Harris-Madison School Corporation Instructional Technology Coordinator, Lisa Kreiger, to examine the use of laptops in the Penn High School classroom. These laptops, configured into mobile labs, improved student engagement and content delivery, and they paved the way for P.H.M.’s 1-1 initiative which was ushered in by the fall, 2014.  This film was screened on October 22nd, 2013 for the Penn-Harris-Madison School Corporation Board of Trustees.

Shooting the First PNN Show of 2013 in Kenya 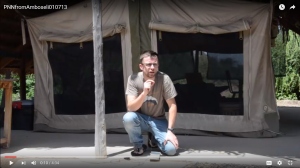 The students of the Penn News Network shoot their shows in the PNN Studio, but the first PNN of 2013 was shot in Kenya, in front of the tent in which I was staying. This film and the others I shot there represent fond memories for me.  Lending my footage and stills to students for editing films is also richly rewarding. 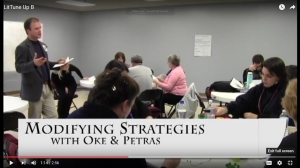 In the Literacy Tune-up, six Penn High School teachers conduct professional development workshops for the Penn High School staff.  These highly effective workshops keep teachers thinking about and employing best-practice literacy strategies.  At Penn High School, these sharing that happens between its PLCs is a key factor in the school’s overall success as a 90-25-90 school.

In 2013, Penn High School instituted a positive behavior model in which teachers began focusing a positive approach to issues of behavior. That approach began with attendance in the classroom. In this film, Penn High School principal, Steve Hope leads members of the Penn staff through the model and how to approach students who are missing class on a regular basis.

Studying the Kikuyu Tribe and the Mau-Mau Revolt

Through the gracious generosity fo the Lilly Foundation of Indianapolis, I got to study the Kikuyu

tribe of Kenya and the Mau-Mau Revolt of the 1950s.  This short film was the first film that came out of the experience, and it is the beginning of the Mau Mau film project that is still in post-production today. My partner in the project, Mr. Joseph Karanja, has retired from teaching, but we still connect from time to time to make presentations on the subject.

You can find more films I have produced for our school district at this Youtube playlist.