By re-imagining a scene from Alfred Hitchcock’s Rear Window, students learned about storytelling  with moving images and sound.  Students played many roles over the course of the week (actor, director, cinematographer, set designer, props manager, storyboard artist, etc.) involved in creating the project you see here.  We found the perfect setting for our film in Wiekamp Hall, and the films we made came together very smoothly.

On Monday we began in the comfy environs of the IUSB Education and Art building where the furniture is modular, the light is beautiful, and the acoustics are pleasant.  We got to know each other with an introduction exercise I like to use in my classrooms.  Once we were fully acquainted, we returned to the instructional space where we talked about Mise en Scene, basic shots, composition, the rule of thirds , lighting and its effects, and movement.

Elaine shared three scenes from two classic movies. Two scenes came from Rebel Without a Cause and one from Rear Window.  We watched them a couple of times, talked about them, talked about what the filmmakers were trying to accomplish.  We then decided which scene we would try to shoot, and scene 14. Message to a Murderer  won out.  We finished the day with a walk around campus to scout out locations.

Tuesday began with shotlists and storyboards and freeze frames.  We revisited the terms we

learned on Monday, and we composed two shot lists and a series of storyboards. Autumn proved to be a particularly skillful storyboard artist.   Listing the shots, ordering them, writing about them, and in general, unpacking them, took a long time. We were very thorough, and everyone was very engaged. By the end of the day, we walked through our set, did some blocking, and tried to see the scene we would be shooting on Wednesday.

Wednesday was all about the shooting. For three hours straight we worked as a team to make sure we got each shot right. All members of the team brought in props and costumes, and

when we turned on the Nikon D7000, we had constructed a pretty good look. Though we had finished blocking our exterior shots on Tuesday, we began shooting our interior shots with the hope that it would be cloudy on Thursday, and the exterior shots would not be so harshly lit. So we got to work in the perch of the “bridge” of Wiekamp Hall.  It made the perfect lookout for Jeff, Lisa, and Stella. The kids played these roles so well, and Brandon offered intuitive direction in the shooting of these scenes.

Thursday’s shoot proved to be very interesting.  Our blocking from the previous two days made sense, so timing worked out well. We battled a bright sun, but we also caught a couple of breaks.  It all worked out so that we were done shooting by around ten o’clock. The previous day we had shot 6GB of material; when we arrived at the computer lab in the basement of the Cafeteria, we had shot almost 3GB more. We logged in with some temporary accounts, moved 9GB of assets onto four computers, and started editing using Adobe Premiere and Photoshop (CC).

Friday  turned out to be the quietest day of the week. In the basement of the Education and Arts building, students took their places at their nonlinear editors and started building story. Three hours was not enough time, but by the end, each student had worked through scene and produced a short film that did the scene justice.  Here is a film that each student had a hand in making, and Mr. McNulty finished it off with some credits.

More About the IUSB STEPs Camps 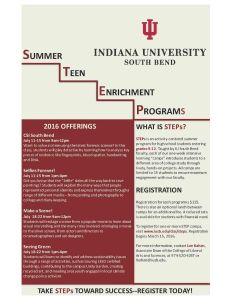 All camps are limited to 15 students to ensure maximum engagement with instructors. Our camp had just a handful of students, but we all agreed, the number was perfect so that everyone had major roles to play in the production.

Enroll in the Make a Scene! summer camp next year by getting in touch with me, Kevin McNulty.  Please use the contact form on this page.